Finding reference materials and drawings on the Frisco 1522 has been a been been met with mixed results. Initially I couldn’t find much and then after posting a couple requests on the Frisco.org website, a great website for all things Frisco related, I was pointed to an article on the Frisco 1500 series locomotives in a back issue of Mainline Modeler magazine which contained a wonderful set of drawings. The article was published in two parts in issues May and June 2003. The drawings were contained in the May issue which I was able to locate on Ebay. I haven’t located the June issue yet but was told it contained no drawings, only photos. With the Frisco 1522 in the local museum I had all the detail photos I could use. It is sort of a bummer that the locomotive is parked between 2 other locomotives which preclude one from being able to step back and take a nice photo of the entire locomotive. However, with it being under roof and sheltered on the sides I would much rather have that then left out in the weather. As nice as the Mainline Modeler drawings were, they provided very little information on the true frame shape and the rigging that was hiding behind the wheels. 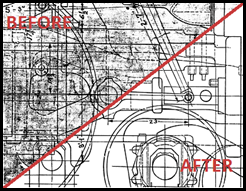 My second and most significant find was when I was given a copy of the erecting card for Frisco’s final order of 1500 series which included engines 1520-1529. Fellow club members put me in contact with Don Wirth whose knowledge on the 1522 and the Frisco railroad in general is quite expansive. He operated in both engineer and fireman capacity on the 1522 in its excursion years and is quite a modeling wizard to boot. The copy quality of the erecting card he had was a little rough in places but it had all the information I needed. I could use it to generate the drawings I would need for the components that were not available and have the water-jet cut from steel. This included the frames, equalizers, frame spreaders, pilot frames and other items. The first order of business was to get the erecting card scanned and clean up the drawing. This took quite awhile sitting at the computer but I believe the result was worth it.

You can find large size scans of both the drawings and erecting card to the right under ‘References’. The files are quite large. The erecting card is presented in two versions; the original version with the prototype’s dimensions and then a copy with all the dimensions in 1.6” scale.

My final source of information is from trips to the Museum of Transportation here in St. Louis and taking hundreds of photos and measurements. I now have all the information I needed to start designing out the frames and other items that I could not find from vendors.